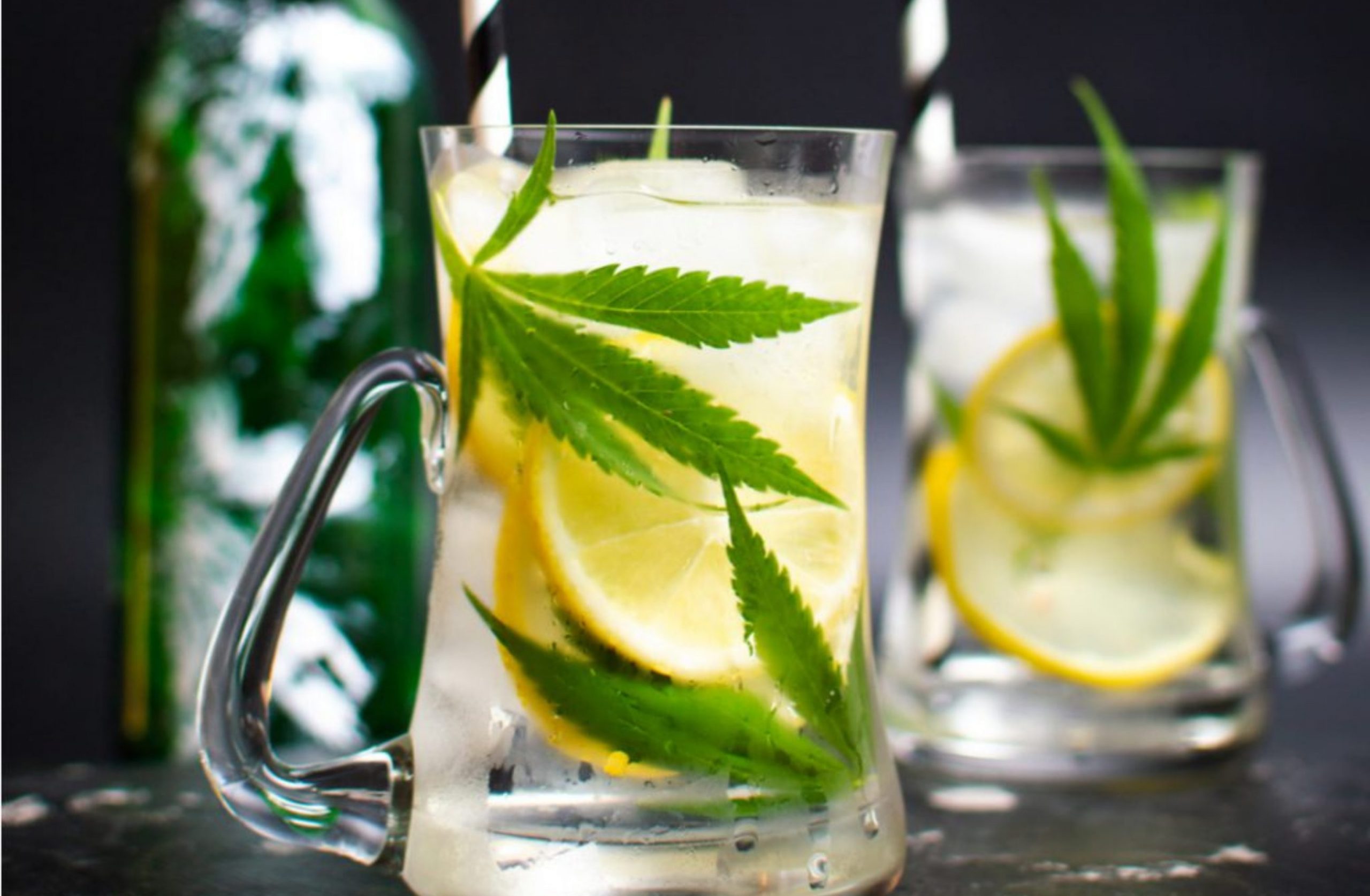 The infusion of cannabis into beverages is transforming the beverage industry and consumers’ drinking habits.

Wellness drinks, in particular, is a significant new category that is bringing  the health benefits of CBD to consumers.

This first wave of cannabis drinks is only the beginning, as many of the big guns in the cannabis and beverage industries have set their sights on what promises to be a huge cannabis beverage market.

Next Big Thing in Cannabis

The first phase of legalized recreational cannabis in Canada did not include beverages and edibles. With the next phase set for the fall of 2019, the major Canadian cannabis producers are forging partnerships with beverage, bio-research, and alcohol companies to bring cannabis beverages to market.

Among the big players is Canopy Growth, which made headlines as the recipient of a $4 billion investment from liquor giant Constellation Brands. Canopy CEO Bruce Linton believes cannabis beverages “represent the next big opportunity.”

Edibles and infused beverages might have a wider appeal than smoking cannabis, Linton said, because consumers might consider eating and drinking the products to be more socially acceptable than smoking them.

Likewise, Tilray CEO Brendan Kennedy believes beverages will ultimately dominate the cannabis market, with only 10% of cannabis being smoked and 90% being consumed as cannabis beverages.

Although many players recognize the commercial potential of cannabis beverages, there are significant challenges involved in producing them. Because cannabinoids are fat soluble rather than water soluble, as beveragedaily notes, “beverage producers are left with the age-old problem of trying to mix oil and water when creating cannabis beverages.”

Another problem with oil-based cannabis absorption is that the effects are not felt for 90 minutes or more, in contrast to alcoholic beverages that are absorbed quickly.

Ascent Industries CEO Philip Campbell said his company’s Agrima Botanticals subsidiary has developed a compound that can be added to drinks to make cannabinoids water soluble and quickly absorbable, with the effects felt in 15 minutes.

Sproutly Canada announced that it has developed a portfolio of cannabis beverages based on its water-soluble MisT and Infuz2O cannabinoid technology.

Among Lexaria’s innovations is a new water-soluble hemp powder called ChrD+ that comes in packets and can be added to any hot or cold drink to infuse hemp oil.

The Green Organic Dutchman (TGOD), which created a global division to focus on the beverage industry, has forged an exclusive agreement with Stillwater Brands to license its RIPPLE SC (Soluble Cannabinoids) technology to create soluble and fast-acting cannabis beverages.

Besides solubility, the taste of cannabis can be a problem, with many people finding cannabis to have an unappealing skunky flavor. Thus, cannabis producers are partnering with biotech research companies to acquire the know-how to create more palatable cannabis beverages.

Terpenes are cannabis components that impart flavors and mood enhancements to cannabis products, and research is being devoted to infusing terpenes into beverages. NaPro Research, Flowr, and Yofumo are among the companies developing techniques to isolate terpenes and breed cannabis strains with particular aromas and tastes. As Mashable reports, a number of brewing companies are adding cannabis terpenes to their beers to produce various flavor profiles.

Lexaria Bioscience has developed delivery technology called DehydraTECH that can be used to infuse cannabis in food and beverages. The technology enhances the taste, smell, speed of action, and absorption. Lexia has introduced a line of cannabis-infused tea, coffee and hot chocolate products, as well as an energy drink.

Among the beverage companies expanding into the cannabis market is Lifford Wine & Spirits. Lisa Campbell, CEO of the company’s Lifford Cannabis Solutions subsidiary, said many cannabis companies are in talks with food and beverage manufacturers that want to extend their brands into the cannabis space.

Campbell said her company was working with a number of partners—including WeedMD, TerrAscend Canada, and Token Naturals—to bring “premium infused products” to market as soon as Canada officially permits edibles and beverages.

Token Naturals focuses on extracting and refining cannabis oils, and CEO Keenan Pascal said his company was working with food and drink manufacturers to design formulas to bring cannabis-infused products to market. Among Token Natural’s products are bitters for infusion into beverages.

Studies show that cannabis sales are growing at the expense of alcohol in states in which cannabis becomes legal. To hedge against a decline in their revenues, major beer brands are launching non-alcoholic cannabis beer lines. New companies also are sprouting up to bring cannabis craft beers to market.

Constellation Brands, the company behind Modelo and Corona beer, has tied its wagon to Canopy Growth Corp. through a $4 billion investment.

Molson Coors followed suit by announcing a joint venture with The Hydropothecary Corporation to develop non-alcoholic cannabis-infused beverages for the Canadian market.

Heineken created a subsidiary called Lagunitas and teamed up with AbsoluteXtracts to create cannabis-infused sparkling water beverages called Hi-Fi Hops that are being sold in California.

Keith Villa, who invented Blue Moon beer for MillerCoors, has launched a new company called Ceria Beverages that will focus on producing a line of non-alcoholic cannabis-infused craft beers.  Villa has partnered with Ebbu, a cannabis company that will provide the extract for beers with or without the skunky cannabis taste. As Villa notes, “It’s tough to make good tasting non-alcoholic beer.”

Also pioneering new beer brewing methods is Province Brands, which has developed a unique method of brewing beer from cannabis rather than barley or grain. The process involves milling and “mashing” to extract fermentable sugars from the cannabis plant, an operation that requires specialized equipment and technology that would not be found in a normal brewery. In November 2018, Province Brands announced agreements with Lost Craft Beer and Brock Street Brewing Company to brew beers from cannabis and hemp.

Coca Cola originally contained cocaine, which was replaced by caffeine, so it’s no large stretch to infuse soda pop with cannabis. Rumors are rampant that Coca Cola and Pepsi are planning to introduce cannabis beverages. Bloomberg reported that Coca Cola was “in serious talks” with Aurora Cannabis.

The cannabis boom has unleashed a wave of research aimed at discovering the medical benefits of cannabis. As Raphael Mechoulam, the father of cannabis research notes, cannabis is a “medicinal treasure trove waiting to be discovered.”

Among those leading the charge is Mindful CEO Phillip Hague, who observes that marijuana contains numerous substances—cannabinoids, flavonoids, terpenes—that have never been investigated in depth. Mindful and other cannabis producers are cultivating CBD-rich strains of cannabis to help unlock the medical potential of cannabis.

Lauren Rudick, a partner at cannabis-focused law firm Hiller, says CBD could become an even bigger mainstream ingredient than THC for the beverage industry. “It’s the perfect wellness product, and there are going to be many CBD-fortified foods and beverages,” she says.

We are witnessing an incredible turnaround in which the once-forbidden cannabis plant is bringing entirely new types of beverages to market—beverages that are revolutionizing not only the beverage industry, but consumer health, drinking habits, and lifestyles.